yes bale is but our strikers are not.

Because our strikers aren't up to it is the reason they aren't scoring. That's great logic isn't it? Blame Bale for scoring goals because it is stopping our so called strikers from scoring. Mate, face facts Ade is sh*t, Defoe is at best a 3in 1 striker but he isn't even that at the moment.
_________________
Baz.

'If Ossie Ardiles had gone to Arsenal, they would have had him marking the goalkeeper or something.' Danny Blanchflower
Guest

said defoe was averge 2 years ago when people thought he was a natural goalscorer,

ade bale stigerson dempsey never pass when they are near the goal.

thats the differnce with man u arsenal and chelsea

they have intelegent players who would pass if someone had a tap in.

benteke , osvaldo , son , remy to name but a few some say an answer to our goal worry woes.
what about our young harry kane had his nose blooded now maybe a solution .the only thing that is missing is a proven goal scorer . as it stands at the moment benteke would be an asset and 19 goals in all that is more than ade and defoe .with the 8 mil clause for remy that may seem like another solution if we can pay his wages.rumours , rumours , rumours higuain and villa mmmm could be interesting lets see what spurs can bring to the table for this coming season .neil
thfc4us

excuse me for being slow in this convo, but just read this !
Bale to go? SERIOUSLY WAT ARE U THINKING MATE!!!!???
Without him we are so middle of the table....not Bales fault we find our selves in this sad SAD situation is it? In Jan we had AMPLE time to bring in another striker the club CHOSE NOT TO.....so because of Bales performance you wanna blame him because we find our strikers to have dried up....WE CAN STILL FINISH TOP 4......and yea yea i kno year after year we say it...hear it....here we go again....BUT damn it ppl surely they cant fcuk this up can they !!!!!!! I for one think Bale is absolutely WORLD CLASS and IF only Ade N defoe put in their MISSES we wouldnt find out selves where we are now.....so i finish with this.....this season spurs have played some beautiful football....and lets finish this season in style !!! 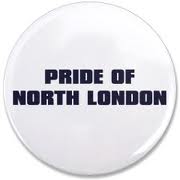 the question still stands pushing spurs forward , spurs display was stella we dug in when we had to and i thought the display from the back 4 was good .avb is now proving that his tactical know how is class bring on the the thud and the little live wire holtby and then defoe when we needed it most .whatmore can we say . got to be honest after city scored i thought the heads would go down but we stood firm and kept plugging away and got the result , chelski what was you thinking of getting rid of avb the young man knows his stuff . you fools . the display today was good we got the point we needed level with chelski 1 point behind the a*se with a game in hand come on you spurs .
nhg72

alex song to spurs anyone could be worth a punt him and sandro together smashing apart attacks , well its just a thought parker is not getting any younger and will be 33 soon . my levy slapping a 100 mil tag on bale , if you have that temptation waved in front of you and we get the 4th spot will levy cave in and will bale want to go . lets hope levy can hold bale and we get the 4th spot that way we get to keep bale champs league and get the net busting goal scorer we need . i think we should cash in on adenogood while we can . looking at the table at the moment benteke and remy will not stay if villa and qpr go down which is possible , lets get the ball rolling and get them for a cheeper price , swallow your pride mr levy pay remys 8 mil buy out clause . benteke looks class on his day and having a couple of belgians already might be tempting for the young lad plus he has has the build of a second row player so he can bully the defenders .
Guest

not sure about song. he was not even rated by the gooners.

the younger generation of spurs player have started to bloom danny rose has the abilities to be a great defender what i have seen he is damn quick with a slightly agressive manner to his game could be the answer to our left back woes . harry kane , tom carrol and even pritchard will be 1st team players within two year or less they have already started to make names for them selfs .avb is now starting to cause a few ripples what with chelski sacking him spurs taking him on and not many people having much hope now real madrid want him , did say ages ago when he settles and players also to his style he will stand tall and be a legend at the lane not bad for a fellow who is only 35 .come on you mighty spurs ...
nhg72

part cash and swop for bale for callejon i think not this fellow callejon maybe quick but he is no bale . we cant sell our assets i mean the same scenario with berbatov , modders but then agin modders we have not missed in my eyes we have got a more complete player with dembele the man his mustard . we need to get out strikers sorted 1st and foremost . negredo has popped up a couple of times and there will be options there is stirings again about damiao but will he live up to his reputation and also the goal scoreing prowess that we need . so many big name players have come to the prem and not managed to cut it , shevchenko rings a bell he had some of the best goal stats but could not keep up with the demand in the prem .
nhg72

already in the closing stages of the prem spurs have been put on alert for higuain 15 mil for the 25 year old 100 plus goals in 184 games not bad , when you compare that villa have placed a value of 20 to 30 mil for benteke . my levy must come good with the facts that you cant rely on the stikers we have . bale has been class for us and for all the world to see .but the question still stands we need a striker asap before we lose out on the vultures who will steal the assets we need .now qpr are down we could go for remy at a cut price of around 8 mil . if he wants out wich im sure he will . lets get the ball rolling now to get the players we need .
nhg72

tonight was not the best performance by far bale seem the shadow of his former self , what ever he done did not pay off . and he found himself to be squeezed out by two chelski players .ade was spot on tonight if only he could have performed like this all season . well tonight proved that there is still work to be done over the next two games and they are must wins .
now that fergie is going it might be the time for spurs to nip things in the bud and get our signings while there is disruptions at man u and chelski with regards to the new managers to take over the reigns .
spurs now have to press hard dig deep and stand tall and get the coveted 4th spot we need to keep bale and get the much needed revinue for signings we need in key positions .
nhg72

said for a while now about benteke the man has already had his nose bloodied in the prem and will fit in rather nice at the lane , if the price tag of around 15 to 20 mil seems a bit of a stumbling block i disagree , 15 to 20 mil for a player who hit the ground running in the prem is peanuts 20 plus goals not bad .i would sooner take benteke than someone from overseas who will take time to adjust to the prem .get in quick mr levy dont let this one slip through the net .
Guest

hopefully we get him.
nhg72

lought what i have seen the man is mustard not only does he score goals its his movement off the ball he has a natural instinct for holding up play for the midfeild to suport the man is a monster 6ft 2" tall and almost as wide .could be one of the best spurs signings of recent times . david vila coming to the lane would put bums on seats just like klinsman did all the years ago .if villa came would he be able to cut it and live upto his crazy scoring record for club and country ?i guess only time will tell . i have said for a while we are only missing a striker and maybe a full back but we have rose thank god .sandro is going to be back in the middle of the park soon so the midfeild should be one of the best , pace strenght and a bit of bite .i think we have lacked the ball dog spirit without sandro and avb will be looking forward to work with him .i remenber a while back that people would say sandro who the hell is he , and then bang the man tore milan to bits .sandro welcome back .
djfitzo

Loughtonguy wrote:15/20 mill is nothing these days.

hopefully we get him.

It's a shame he stopped us from getting near Cheatski, Villa were well in control until he got sent off.

yep stupid sending off and if he ends up at chelsea then ill suspect foul play.

as for sandro even last year i was saying he should play instead of parker.

huge fan of sandro.
parker gives hes all but hes so limited in what he can do
nhg72

keeping avb with his shit


noone loses quite like us we must love being beaten heavy as we never fucking learn year after year.
Guest

we also got more points then harry hoddle and all the others.
LOVELOVEROCKET

blinded by stats and figures

In total there are 3 users online :: 0 Registered, 0 Hidden and 3 Guests