soldado was good today. he worked hard and was unlucky not to score.

defoe is nothing like greaves. defoe has 1 goal in 19 prem games
Guest

lloris 6 he should of been sent off after naughton suside back pass and also was nowhere for the goal that got disallowed but he did not let it affect him.
walker7 lot better today
dawson 5 hes forever miss time tackles and long balls
verts 8 faultless
naughton 6 second half he was better. like how hes always trying to find our forwards
dembele 7 worked half
paulllino 8 worked hes socks off and to be in that postion in injury time just goes to show how hungry he is
towsend 7 decent game
siggy 6 works hard 1 shot hit the bar but wish he pass more
soldado 7 worked hard. always bringin players into the game . nice runs into the flanks and unlucky not to score

avb10 great subs. holtby and lamela what we needed to keep the energy up.

great header from lamela that let to holtby who picked out paullino who scored with a cheeky back flick......
vis 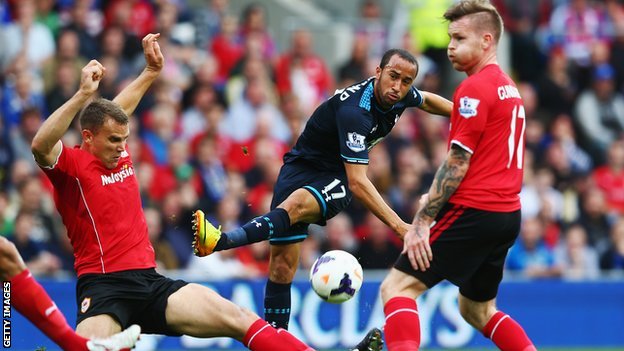 Paulinho's stoppage-time winner for Tottenham settled a tense encounter against Cardiff to move Spurs into second place in the Premier League.

Bluebirds goalkeeper David Marshall produced a series of outstanding saves to keep the Londoners at bay.

But the Brazilian back-heeled in Erik Lamela's low cross right at the death.

It was nothing more than Andre Villas-Boas' side deserved after dominating for long periods against Malky Mackay's dogged side.

Gylfi Sigurdsson was the first Spurs man to be denied by Scotland's Marshall, though at the other end Frenchman Hugo Lloris had to be alert when Fraizer Campbell was given the chance to open the scoring.

Home fans were convinced Lloris had handled the ball outside the area as he took it from Campbell's feet.

A goal for the hosts would have been against the run of play, however, a fact underlined when Andros Townsend's run and cut-back gave Roberto Soldado a chance.

Former Spurs defender Steven Caulker then had to block another Soldado effort, an intervention that indirectly produced the best save of the opening period.

Sigurdsson was first to the rebound, whipping in a low shot that seemed net-bound. But Marshall's instinctive dive and fingertip touch ensured the ball trickled harmlessly behind.

Having hardly been troubled in the Spurs goal, Lloris then gifted Cardiff a corner when he failed to control a long ball with his feet.

From the corner, Lloris was beaten by Ben Turner's header but the goal was ruled out for Aron Gunnarsson's goal-line tug on the keeper.

The hosts also had the first chance after the break as Craig Bellamy went clear on the right only for Lloris to intercept a cross intended for Peter Whittingham.

But the focus was back at the other end when Sigurdsson's drive - a strike so powerful it turned out to have burst the ball - came back off the cross-bar and Soldado's first-time follow-up produced a two-footed block from Marshall.

Cardiff boss Mackay sent on former West Brom striker Peter Odemwingie for his debut as the hosts sought a winner.

The Nigeria international's introduction gave the hosts fresh impetus and everyone in the ground thought he had created the opener with a pull-back for Gunnarsson that the unmarked midfielder could only turn high over the bar.

Tottenham have now won four of their first five Premier League encounters for the first time since 2009-10. And of 15 top-flight games against Cardiff, Spurs have won eight, drawn three and lost four.
_________________
“I have been here since I was a boy, I have always considered it my Club and have always found it hard to imagine wearing the shirt of another team," Ledley King 2012 (any Spurs fan would say the same)
BazSpur

Didn't realise he wasn't in the squad Dave. Prefer him to Kane. Kane just doesn't look like he has what it takes.

'If Ossie Ardiles had gone to Arsenal, they would have had him marking the goalkeeper or something.' Danny Blanchflower
cstmrsking

Looks a bit like Suarez. Has got a stiffy? most be all the excitement of scoring a Goal! lol
BazSpur

'If Ossie Ardiles had gone to Arsenal, they would have had him marking the goalkeeper or something.' Danny Blanchflower
Guest

Jermain Defoe was absent from the Spurs squad after injuring a groin muscle in training. He will have scans today to assess the damage.
_________________

In total there are 8 users online :: 0 Registered, 0 Hidden and 8 Guests