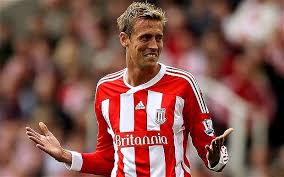 ffs walker only had to get through 2 more games and it would of been wiped.

'utterly brilliant!' and 'blaaah!' its saturday its wacaday

Maybe NOW nice but dim will play a ball winner in midfield.
totalytot

This should be a definate win especially as Stoke have just come off a 5-1 defeat by Newcastle, but don't hold your breath.

I just don't know where we are anymore or what to expect. West Ham are sitting 2nd from bottom and have beaten us twice this season already.

Giving Sherwood a 18 month contract seems that Levy has already written this season off. What a contrast to a couple of months ago when we all had such high hopes with the new players in. Still this is Tottenham Hotspurs we are talking about and nothing is ever as it seems.

Sherwood has never managed a club before so I can't see us attracting any players. I do think that having a big name manager does help when it comes to a player making a decision as to which club he signs for, and I do not think that Sherwood will ever be a manager that we will be talking about for years to come. I agree Mikey Re Levy giving up on this season and to be honest I think this club is in one of the worst positions I have seen it in for years, Levy does not seem to have any answers and he has proved it by making Sherwood manager. How can we expect a top manager to ever take over at this club knowing that after a couple of bad results he will be sacked after 18 months. I have lost all heart when it comes to supporting this club. I want to be given some hope that the future is bright for this club but under Levy I can not see that happening, I just want him out, everybody hits out at the players and managers but I think he has a lot to answer for, he has made this club a laughing stock, the gooner and Chelski fans must be loving all this.
Boltjean

Sorry, I should not have posted my remarks on this Stoke topic page.
Guest

http://livesport4u.com/stream1.html
_________________
“I have been here since I was a boy, I have always considered it my Club and have always found it hard to imagine wearing the shirt of another team," Ledley King 2012 (any Spurs fan would say the same)
vis

Well I saw some nice football from Spurs the 1st half but as always no real end product. Usual story eh . . . . .
_________________
“I have been here since I was a boy, I have always considered it my Club and have always found it hard to imagine wearing the shirt of another team," Ledley King 2012 (any Spurs fan would say the same)
Guest

yep need to kill these games off

Much better 2nd half and in truth better overall the whole game. We still need to convert the chances into more goals and I still think better teams will rip us apart. That said I'm impressed that Sherwood is allowing Soldado & Adabadbigtoe to try and forge a partnership. Fryers continues to impress me as well. Lad looks like a good prospect. Good 3 points today and a rare, of late, clean sheet. Real test for Sherwood comes in the next game against Utd. Could make himself a few converts with the right result. Fair play today he got things right . . . . . .
_________________
“I have been here since I was a boy, I have always considered it my Club and have always found it hard to imagine wearing the shirt of another team," Ledley King 2012 (any Spurs fan would say the same)
totalytot

It could have been 3-0 in the first 25 minutes, there were some real easy chances missed.

I was pleased with the way we played and looked dangerous everytime we went forward.

I know I've criticised Dembele a lot but he had a good game today and his goal was a great one if only he shot more often. But he does flatter to decieve a lot of the times.

I don't think anybody had a bad game although Eriksen does get shaken off the ball to easy at times but he still seems the only player that can deliver that special pass. He and Paulinio are the two I would want to keep out of all the buys we made in the summer.

Utd next and we will have to make sure we don't leave holes in defence as we have been doing otherwise it could be another big score against us.

I enjoyed todays game and hope it gives the team a real boost for the coming months.

Played really well today and our possession must have been through the roof. Paulinho was sensational before he went off injured. Big test to come next against United but hey, nothing ventured nothing gained.
_________________
Baz.

'If Ossie Ardiles had gone to Arsenal, they would have had him marking the goalkeeper or something.' Danny Blanchflower
LOVELOVEROCKET

lets not get carried away it was stoke plus the new manager syndrome.

much better football lot missed chances , utd game will give a yard stick on how we will cope with the weeks ahead.

least we giving it ago .....that all you can ask for

Lloris 6----Not much to do. Came for some crosses very confidently.
Naughton 7----Much better on the right. some good early combinations with Lennon.
Dawson 7---done well aganst Crouch well. One very timely tackle. Again though he was not troubled so much by their attack.
Chriches -- 6----Great on the ball at bringing it out.
Fryers -6-----Some nice runs up the left showing his pace. Had space to move into with Eriksen moving inside.
Lennon 9-----Some great runs in behind. Created two gilt edge chances for both the forwards and go a nice goal. As well as covering Naughton.
Dembele -8-----Great on the ball, shruging off challenge after challenge. Got forward more and a nice nice goal.
Paulinhio -- 9-----Was bossing it in the first half. Great runs, creative passing and all around energy. Fatty Adams did him in the second like he seems to do to one of our players every season.
Eriksen ---- 7----Some nice passing at times, kept the ball moving. Dead ball play was terrible from him today.
Adebayor - 8Some good team work with Soldado. Good hole up play and running and won the penalty. Missed a sitter from Lennon and seems to like shouting at Lamela.
Soldado -- 6Got more involved and a good penatly. But missed two great chances and looks well off confidence.