so we going end up with captain sensible be good choice for us.

Who do we reckon wll get?
Who do we want?
LOVELOVEROCKET

POCCETINHO IS NOW ODDS ON SO BEST PACK YOUR BAGS BOYS THIS IS GOING TO END IN TEARS.....

I own up fair is fair you were right he hasn't measured up. He started very well but got cocky towards the end
superkaboul 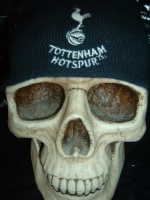 get benitez in. hes got proper knowledge of the premiership. he can command respect from our players who think there bigger than they are. pochetino is an accident waiting to happen, he did ok with Southampton but hes got no form to speak of , and it will end with him sacked halfway through it with a big pay off. benitez for me and sort it now levy, do all you can to get him .
totalytot

I certainly don't want Benitez. He's a ditherer and never lasts long at a club. Sure he's got experience but he's been around the block to many times. Even Chelsea only had him as a make weight until Mourinio came. These days that's what he seems used for, a stop gap. It's not what we want.

We need stability and a manager with a plan A,B and C. Somebody that can change games when things are going wrong and a strong character that the players listen to and respect.

Who is he I don't know? Pochetino is young and has a good first season in the Premiership with Southampton and they play good open football the way we like it. He could turn out to be a top manager and personally I would be quite happy for him to come.

But I'm still hoping that Real Madrid sack Ancellote because I think he's just the guy we need.

Ramirez, forget it he wouldn't last a year.

The trouble is we all know that Levy will leave it late and end up with another tosser at the last minute.

He knew that he was going to fire Shitwood  weeks ago so he needed to get things into place before the WC so a new manager could take stock of the players he would like to get in and those he want's to go.

I might be doing Levy a diservice and he could already have someone in place but I doubt it. He hasn't got it right in 10 years so why think now is any different?

Even the press in the last week have been saying that maybe the bossman mr Lewis might be looking for a change up top. Mondays Mail said that the trouble is that Levy is not a football man. Well I think we can all agree with that. I have said many times that if this was M & S or Bank of Scotland he would have been gone long ago. I'm fed up looking at his expressionless face every week on the telly showing no emotion.

They are my views and some might think harsh but this season was a total fuck up and I can't see next being any better as we now have a lot of players that we have bought and are not good enough and the ones that are will probably leave.

That's why we need our new manager, who ever he is in NOW!!!

Straight after world cup it's pre-season and early Europa qualifying. Maybe Levy is biding his time to hog the lime light? That would prove it's his ego that is the driving force not what is best for Spurs . . . .
_________________
“I have been here since I was a boy, I have always considered it my Club and have always found it hard to imagine wearing the shirt of another team," Ledley King 2012 (any Spurs fan would say the same)
seebee1944

Problem for Levy is whoever he employs, there will be a section of supporters who won't agree. Already on here we've had don't want Pochettino, dont want Benitez, don't want Moyes and so on.
Wouldn't want to have to make the choice cos he will be criticised and well we didn't want so and so in the first place.
It's so easy to criticise and be like the daily fail but seriously would any of you want his job.
seebee1944


Right having said that, I do think that ENIC need now to decide whether they are in it for the sell on value when it becomes viable, or whether they want to run it purely for the football side.
vis

'If Ossie Ardiles had gone to Arsenal, they would have had him marking the goalkeeper or something.' Danny Blanchflower
Sponsored content

In total there are 6 users online :: 0 Registered, 0 Hidden and 6 Guests